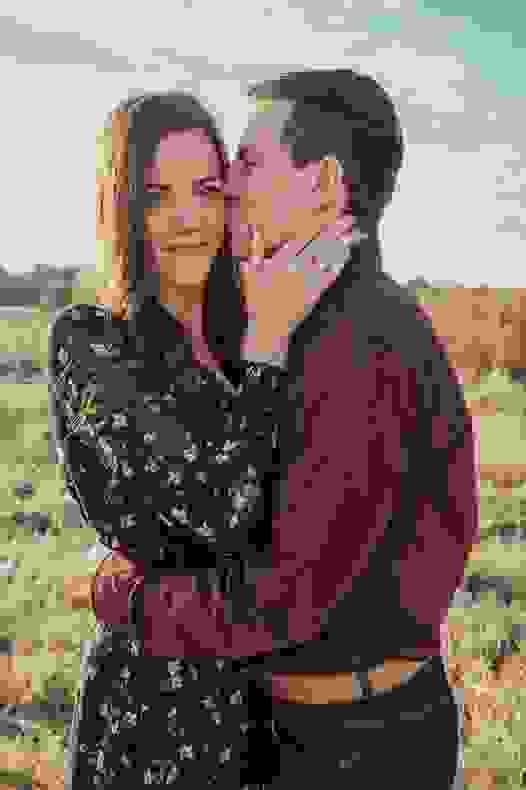 My husband Matt and I met over 4th of July weekend 2013 through a mutual friend and began dating within the month. Matt proposed on New Year’s Eve (December 31, 2015), and we married in September 2017. The week before our wedding, I accepted my dream job and later that year we moved to Memphis where we quickly began imagining our life together in this new city. Fast forward to August 2018, we realized we hadn’t yet established a network of providers in the area, and Matt went for a yearly physical to do so. Walking into this physical he was the healthiest person I knew – even that day his labs looked perfect, he looked great, felt great, but his doctor quietly palpated a mass in his abdomen. An in-office ultrasound turned into an emergent CT, which turned into an immediate referral to West Cancer Center, and soon we were blindsided with Matt having a diagnosis of stage IV SDHB-deficient Gastrointestinal Stromal Tumor (a very rare, genetic soft tissue sarcoma without current treatment or cure). He had major abdominal surgery in November 2018 to remove the primary tumor off the lining of his stomach for quality of life (and to decrease risk of rupture into his stomach). Following this surgery, he still has 10 tumors in his liver, and residual cancer cells along his stomach lining and lymph nodes that there currently is no cure or safe treatment for; we feel so incredibly blessed that this all has been stable without treatment since surgery in 2018.

If we rewind, our IVF journey technically began in August 2018 as Matt’s oncologist encouraged sperm banking prior to initially starting chemotherapy (before his exact sub-type of GIST revealed chemo would not work); and it has been a roller-coaster ever since. Shortly after diagnosis, we met with a genetic counselor and found out there was a 50% chance our children would receive this gene deletion that led to Matt’s cancer, and if received, a 50% chance they would inherit one or more of many various types of cancer. We immediately made the decision to pursue IVF with PGD (genetic testing of our embryos) to hopefully end this gene risk within our family, and do everything we could to protect our sweet babies from the start.

Upon meeting with our RE for the first time (and following the slue of tests) it was expressed that if we could get at least 1 embryo without Matt’s gene, everything with us both looked great as candidates for IVF – no other fertility concerns to worry about.  We were so encouraged to then receive the news after retrieval, fertilization, and testing, that 5 great graded embryos passed both PGD and PGS testing, and were frozen and ready for us. Unfortunately, our first transfer ended with an ectopic pregnancy resulting in surgery/removal of our sweet boy and my tube; our second transfer ended in chemical miscarriage; and our third transfer failed to implant.  We are still searching for answers/reasons as to why this has not been as smooth as expected, meanwhile keeping faith that God’s plan does include bringing home our miracle baby one day.

We are so thankful to have incredible health insurance considering Matt’s cancer journey, but unfortunately, our insurance does not include fertility coverage. We also quickly realized that we don’t qualify for any grants (that we have found) as Matt is not “no evidence of disease” or “in remission” (and we aren’t sure if/when he will ever be), which many cancer-funded fertility grants require. We are advocating for fertility coverage across Tennessee (and ideally the United States and world if we’re dreaming big), in hopes that any individual or couple choosing or required to seek help in building their family, won’t be limited in doing so due to their finances. We also hope by sharing our story, we increase awareness and acceptance of PGD testing for genetic conditions, as we firmly believe attempts at protecting your baby pre-conception should be viewed the same as if you were doing so after birth (and covered by insurance similarly as well). Please feel free to reach out with any questions about our journey, or for prayers on your own, as we believe in the power of both prayer and community. {He performs wonders that cannot be fathomed, miracles that cannot be counted. -Job 5:9}