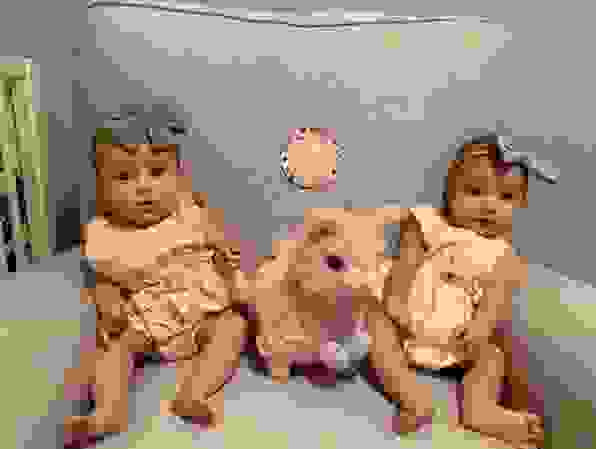 My husband, Kyle and I are high school sweethearts. We’ve been together since 2006 and have been married since 2012. Kyle and I struggled with infertility for 4.5+ years and will continue to struggle to complete our family. We did numerous medicated cycles and 2 IUIs. I believe for a normal IUI the percentage of it working for most is 10 to 15%. We had a less than 4% chance but we still wanted to say we tried. Instead of trying again for the 3rd time, we decided to move forward with IVF. After the retrieval, we got 10 embryos. We transferred our first embryo soon after and got a positive but very low beta. I was told to be cautiously optimistic. Our numbers were doubling like they should and we scheduled our first US. US day came and during the appointment we were told we didn’t have a baby in my uterus...turns out it was an ectopic pregnancy. The chances of that happening were less than 1%. I had zero symptoms besides the occasional spotting but the nurse said that was normal for any pregnancy in the 1st trimester. I had surgery almost immediately and they removed the baby and my left tube.

Kyle and I waited about 6 months before trying again. Having the positive pregnancy tests and betas turn into ectopic with surgery took a huge mental toll on me. We transferred again and it was a BFN. Next cycle, we decided to transfer 2 embryos instead of one. I got a positive yet low beta again but by week 5 it started dropping and my Dr. said it was a chemical pregnancy. After the chemical pregnancy our Dr. gave us options to PGS our remaining embryos and/or an ERA. We decided to proceed with the ERA and got the exact number of progesterone hours we needed the day of transfer.

So September 2019, just 2 months shy of hitting 5 years of trying, we decided to transfer 2 embryos again. This time out we got the call and it was a positive beta of 408!! I was so shocked and excited and nervous. This could be it. Like we all know, infertility comes with the rollercoaster of emotions and you never want to be too excited because in an instant the excitement can be taking away from you. Well our numbers kept doubling and we scheduled our first US. That’s when we learned we were pregnant with TWINS!! We later found out they were both girls.

Holding them for the first time makes all our struggles worth it because it brought me my 2 baby girls. They are 15 weeks old now.

We still have 4 embryos remaining. We haven’t decided if we want to do the PGS on them to determine if any are good or just do individual transfers again. Throughout our whole process insurance has not covered anything, not even the medications. I started a blog when we were first going through our struggles if anyone wants a more detailed experience we went through.